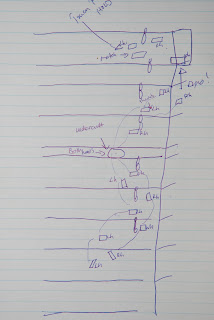 This classic maxim to get people to plan and think ahead is often applied to a whole manner of different situation, and it also holds true in climbing, especially if you are planning on pushing your boundaries. At its most basic it is refering to having done the ground work, for instant there aren’t many people who are going to get up after a prolonged period on the couch and climb at there previous limit.

If you have been out climbing at your limit for a few months and feel comfortable, then prehaps you’ve done the neccessary work to push those limits and step across that line in the sand to a new no mans land where anything can happen. If that’s the case then there are a few things you can do to minimise the unexpected.

First off consider draw the route, this diagram can take the form of anything from a very basic pencil drawing showing the expected path, and main features like corners, aretes, cracks, holds and quickdraw. Or it could simply be an image in your head.

If its and indoor route, try to include all the hand holds and which direct they look best to hold them, were you can shake out, which holds you clip off and where the crux section of the route is. These diagrams can also be used to break the routes down into sections.

If it is outdoors, where are the rests, the gear, if its a sports route where might you clip off. Where is the crux, where might you get a shake out. What shapes are there that offer a rest or respite.

If you start off drawing the diagram you will eventually find that there is no need draw it, as you can build a mental picture by breaking the route down, into easy climbing, hard climbing, crux sections, possible rests, even where there is protection. Often to achieve this you’ll need to view the route from several different view points, to get a better 3D image of the route, alternatively it is also posssbile to climb an easier adjacent route, allowing you a birds eye view of crucial holds.

Climbing an adjacent route will also allow you to get used to the type of holds, the angle of the wall, and even the style of climbing. This in turn will help you to imagine how you might climb the route in your own mind. At its most advance level you would include imagining a series of ‘What if’s’ – the gear isn’t as good as you thought, the holds are smaller, the rock is steeper, the crux is harder, the gear is better, etc…

The key Points are:
Start drawing a diagram of routes
Break the route into sections
Where are the likely rests/shake outs
Look at the route from several different view points to get a better 3D image
Climb an easier adjacent route to get a feel for the rock and another view point
Imagine how you might climb the route

How to Climb Harder Course

On the how to climb harder course we cover these skill sou planning and preparation as a tactic to improve peoples climbing. You’ll be amazed at how effective they are. To find out more or to check out when out next How to Climb Harder course follow the link.